Hold my hand as I walk across the threshold

“The Holy Spirit is our harpist and all the strings which are touched in love must sound.” 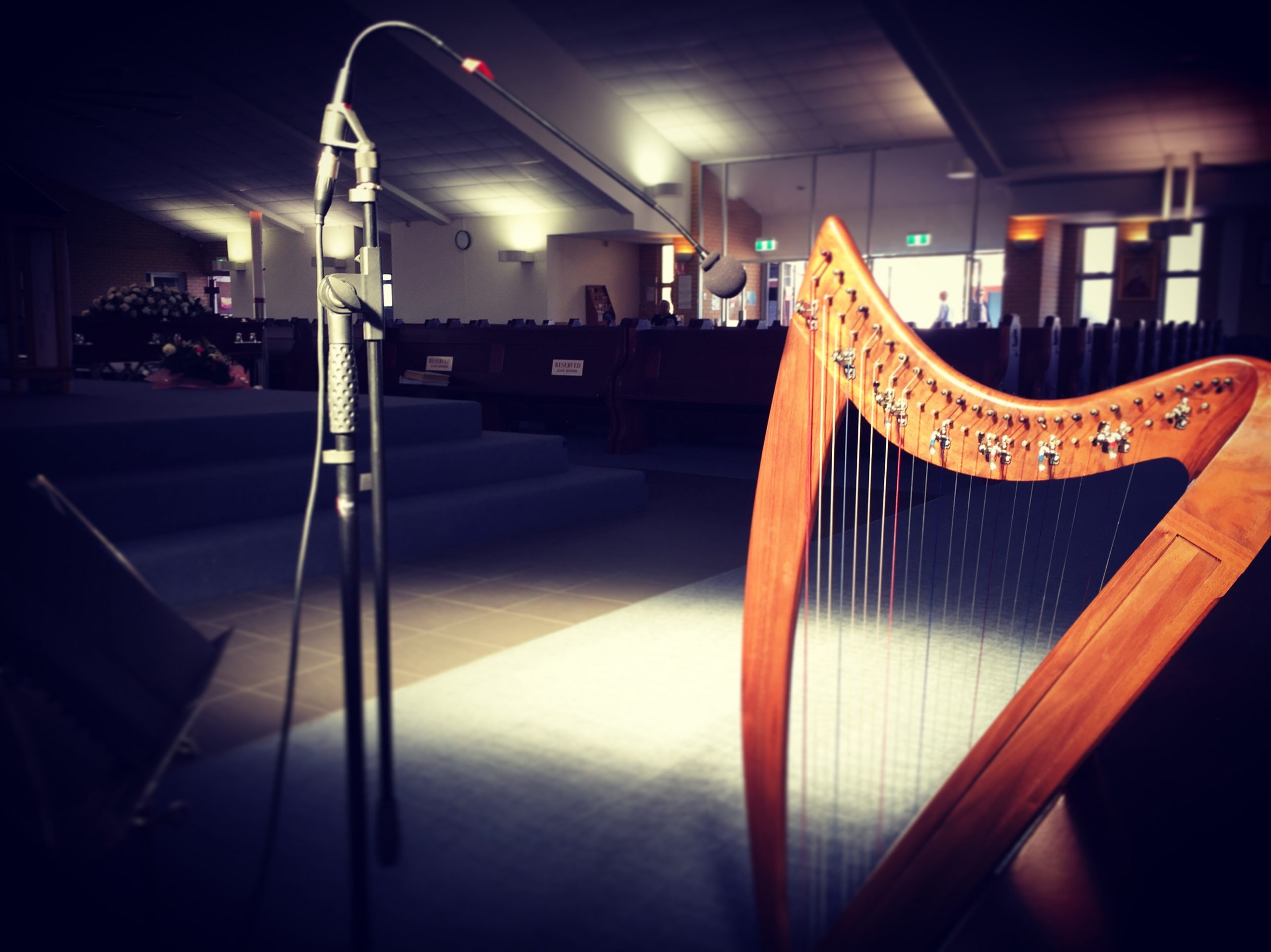 This ancient art form, synonymous with healing over centuries of history, the harp has the ability to bring peace, calm, uplift and soothe. David played his harp for the King to sooth him, the ancient Greek philosopher and mathematician Pythagoras believed that individual frequencies in music can support healing in the body and was reported to have used therapeutic sound to treat physical and emotional problems.

Trained to use vibration, very old and ancient modes, harmony, tone and rhythm to heal, calm, uplift and raise the vibration of a space. Angela can also provide a seamless experience of healing harp, a hands-on musical experience with drums and other instruments, along with any type of education, presentation or training to enhance your conference, retreat, or event.

On the board of the Australian Harp Therapy Association as training and development facilitator, Angela shares her extensive experience with musicians of Australia and the globe. The second musician to complete the International Healing Musicians Program in Australia (IHMP) with the late Stella Benson CMP, Angela has mastered the ability to be those suffering or dying.

Master of many traditional music’s and instrument’s from around the world, harpist and solo classical flautist, Angela has performed on global stages in ensembles such as the SBS Orchestra, Seh Sek Hoi (Traditional Korean Sharmen / Folk Drumming), Baklava (Eastern European and Middle Eastern Music) and more. Angela has always had a passion and connection to culture, art and music of the world, forming a part of her role as unifier and bringer of peace.

Resident Harpist for inaugural events such as The International Wave of Light, Candlelight Ceremony, a global service remembering those who have experienced Pregnancy and Infant Loss, and the Inaugural Baby Lily Grace Awareness Day Memorial and Candle lighting Ceremony. A moving dawn service to honour the many abandoned and unidentified children found each year.

Angela spent many years as the resident Therapeutic Harpist on the Palliative Care Wards of Calvary Health Care Hospital in Kogarah, devoting hundreds of hours at the bedside of the dying and ill. She has spoken at a National level on a number of occasions for NSW Palliative Care Conferences, run workshops and ceremony for Compassionate Friends Australia Conferences and events (an organisation who support those who have lost children.) Trained staff at St George Hospital Sydney how to use music to support their patients, worked with Neonates at Westmead Children’s Hospital playing harp for the Neonates and Premature Babies, not to mention the countless Funerals, Viewings, Christenings, Weddings and Ceremonies of all kinds. Angela has become a master at creating sacred space with sound. Book Angela for your event or ceremony.

Angela is available for private sessions at the bedside of your loved one who may be ailing, on their final mile home, or simply in need of the power of music to uplift the soul. These personalised sessions are designed to deliver relaxation, uplift, assist with sleep, mood, and bring peace. It also often improves levels of suffering and lowers pain, anxiety and induces a calm state where drugs and medication may have failed. A powerful service where Angela brings forth her 10 years’ + experience, with thousands of hours, hundreds of clients and their families at the bedside. Clinical Therapeutic Harp is a one on one service that focuses deeply on an individual’s immediate needs through the monitoring of body language, facial signs and colour, heart and breathing rates and intuition. No two sessions will be alike as the sound of the soul is interpreted through the strings of the harp.

Also available to play Harp, Native American Healing Drum or Flutes from around the world for Sacred Ceremony, Memorials, Candle Lightings, conferences or any event that requires the special skill of intuitively sensing the needs of the room and those in it.

Also available to play harp for Funerals, Ceremonies, Candle Lighting Memorials, Remembrance Days. For more information please see our contact form below. If you have a loved ones funeral, or ceremony of any kind we would love to hear from you.

“Your Harp playing gave me an inner peace I haven’t experienced for a very long time. Thank you Angela.”

“My dearest Angela, thank you for the time you have taken to share with me your wonderful gift. You have amazing talent as a harpist, but more than that, you are a very beautiful human being who truly cares for others. Your harp playing took me to a calm and peaceful place and gave me an inner peace I have not experienced for a long time. Thank you dear Angela.“

“Lesley was left with a lovely glow afterwards and I was able to take away a deep peacefulness that lasted for days.”

“In January 2015 a dear family friend, Lesley was diagnosed with pancreatic cancer. As her condition deteriorated she spent more time in Blacktown Hospital to receive palliative care. During this time I approached Angela to play the therapeutic harp for Lesley as a way for her to have reprieve from pain and to uplift her mind, body and spirit as she was facing her battle with cancer.

Her harp music filled the room and we all experienced something unique and profoundly moving in those sittings. Lesley visibly relaxed and spoke of being able to visualise a precious sunrise she had witnessed with her family at a beautiful place in the Blue Mountains. She vividly recalled feelings of peace and beauty of the morning spent there.

It is my hope that the work Angela provides is gifted to other families and individuals as they move through difficult times, so they are able to experience peace and go beyond a hospital bed as Lesley did, during her illness.

We love hearing from you!

Whether you need a key note speaker, workshop facilitator, sacred harpist for your loved ones final days or life celebration, we would be honoured to hear from you.

Send me an email…